Posted at 20:40h in Uncategorized by Tracey 12 Comments
Share

How Do You Spell Schwag?

If you’re asking me, I’d say M-I-N-T-I. But if you’re asking my 8-year-old she’d spell it like this,
“schwag, S-C-H-W-A-G, schwag”
because she’s the Third Grade Spelling B Champ!

Yes, folks, the accolades just keep coming. Last week, student of the month, this week, first place in the Spelling B. Pretty incredible!

And me?? Well, I’m just basking in the glow of her amazingness and sporting my new Minti Schwag. Insleeves even. Where’s my lighter? 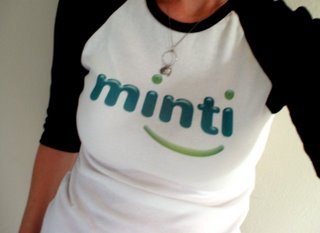 Yes, this is me and not a Cafe Press model although
I’m pretty sure this pose was inspired by one.


This is beginning to resemble a coat tails story. I’m riding my daughter’s, as I am known around town now as Julia’s Mom and doing the same with Minti a little bit too I guess. See, I’ve signed on as a Minti Ambassador (what tha?). A pretty cool title I guess, only second to a Bad-Ass-ador. I mean, I can capitalize it if I want, right?. There’s something. Here’s the sitch- I get to be involved with the super cool parenting community at Minti and offer advice (do I ever shut up?) and get awards for it…yes awards! Go check it out. I’m telling you it’s the funnest thing. You become a member (takes like one second) and then you get to write advice, answer pleas for help,post goodies at your very own Minti blog, and they award you these really awesome virtual awards (medals and patches) kinda like a Girl (or Boy) Scout thing. It’s pretty fun and as pathetic as it may sound, an ego boost. I obviously am still scarred from never being a Scout so this helps me fill the void of growing up patchless. Anyway, I’m all crazy-addicted and won’t be satisfied until I collect ALL OF THE PATCHES. Yikes. Now, I’m scaring myself and my children and you. Anyway, I’m just going to help them spread the good Minti word, that’s all. Because, I really don’t have enough on my plate these days so I figured, ‘what the hey’?

So, as far as formalities, you can call me Mrs. Ambassador (Ambassador for short) or Julia’s Mom. I’ll answer to any of them.